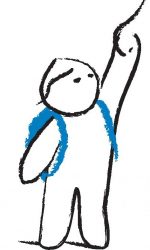 Dr. Lagana used his retirement party as a way to raise startup funds to launch the Homeless Children and Family Emergency Fund (later renamed Homeless Children’s Education Fund). The purpose of the fund was to advocate for the children and families in shelters and to raise money and in-kind services to support shelter efforts such as transit, uniforms, and clothes. HCEF became incorporated on February 19, 1999 and became a 501(c)(3) nonprofit on July 21, 1999.

In 2000, HCEF built its first learning center at partnering shelter, Womanspace East. It was little more than three computers in a large closet, but it was a start! A year later, the annual backpacks distribution began, where HCEF delivered 200 backpacks to youth experiencing homelessness. By 2005, the number of backpacks grew to 2,000, with HCEF providing them to shelters from all over Allegheny County.

Shortly after the founding of the backpacks distribution, HCEF implemented the mini-grants program, gifting shelters with funding for educational field trips and excursions. Over this period of time, HCEF saw massive growth, and as a result, the Building Blocks program began in 2008 with the goal of helping 22 students at Womanspace East with their reading and literacy skills.

HCEF has adapted and grown since then, adding new programs to meet the ever-changing needs of students. HCEF launched the Outreach Team in 2010 and a post-secondary scholarship in 2014, entitled the Hope Through Learning Award. In 2017, at the request of the Heinz Endowments, HCEF created the Teen Outreach program to reach older populations who typically do not stay at shelters, but need extra educational and career-related support.

From its beginning, HCEF has operated with the belief that community collaboration is essential in helping our children and youth overcome the obstacles of homelessness, develop resilience, and reach their full potential in life and learning. Community members have the opportunity to contribute their time, talents, and treasures to this cause while becoming knowledgeable advocates. We are grateful to all who have built our programs.

We have come a long way from the single learning center at Womanspace East; HCEF now partners with 27 agencies serving families experiencing homelessness and continues to expand and improve the quality of its services. After helping shape the organization, Dr. Lagana is now retired from the board, and HCEF is lead by Executive Director Carlos T. Carter.