Book in a Backpack

Book in a Backpack 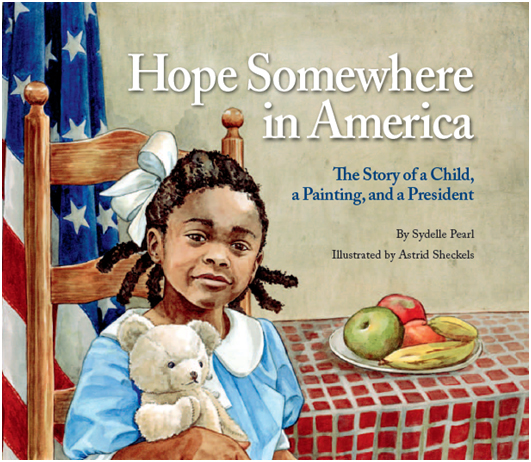 I began working as an after school reading tutor with the Homeless Children’s Education Fund (HCEF) in the winter of 2010. I enjoyed choosing the library books I planned to read to the children in various Pittsburgh shelters and I especially loved to read aloud to them. We often shared the reading; I would read a page, then they would read the next one and so on.

In the spring of 2010, I attended an exhibition at The Frick Pittsburgh called “1934: A New Deal for Artists” where I encountered a painting of a little African-American girl holding her teddy bear in her lap and looking out unflinchingly at the viewer. It was called “Somewhere in America” and was painted by Robert Brackman. In 1934, it was chosen to hang in the Department of Labor Building and in 1964 it was moved to the Smithsonian American Art Museum, its current home.

I could not stop looking at this painting; as I looked into the little girl’s eyes I knew she had a story to tell. I began taking notes in my notebook that I always carried. The notes became the springboard to my research and my various drafts and in 2011, my story was accepted for publication by Twin Lights Publishers. In the spring of 2012, I was thrilled to hold a copy of my book, Hope Somewhere in America, in my hands.

In the fall of 2012, I traded my reading tutor job for my work as an author. Through the years of my partnership with HCEF, I have had the extraordinary privilege and pleasure to share my own books with children in various shelters.

One of the most moving moments of my life occurred in October of 2014 when I visited a particular shelter for the third time as an author with my book Hope Somewhere in America.  Each time I came to this shelter, I met new children except for ten year old Michael*, who was still living at the shelter.  In July, he received a personalized autographed copy of my book after he became exposed to it for the first time.  When I visited the shelter again in August, I encouraged him to share any details he recalled about my book as I sat with a group of children in a semi-circle.  Michael beamed as he helped me review the story.  I noticed that this time he approached the self-portrait art activity very thoughtfully and carefully.  He did not receive a copy of my book since he had already received it the previous month.  When I revisited this shelter in October, Michael arrived after I had already begun sharing my book with a group of new children.  He entered quietly, slid his backpack onto one of the tables, and joined us in our semi-circle.  I remember thinking that his backpack appeared to be quite heavy.

I welcomed him warmly and his smile lit up his face as well as the whole room.  When I asked him to describe what he recalled about the story, he inspired us to look deeply at the illustrations to notice particular details, and he wondered aloud many thoughts pertaining to the story.  Suddenly, he stood up and said he had something he wanted to show me.  I put my finger in the book to mark my place and asked everyone to close their eyes.  I could hear him rummaging through his backpack. After a few minutes, he told us to open our eyes.  There he stood, triumphantly holding up a copy of Hope Somewhere in America that was missing its jacket.  I knew instantly that this was the copy of my book that I had presented to him in July.  I finished up the story with everyone and then asked him privately if I could open up his book.  There it was—the inscription I had written three months prior.

This boy who lived in temporary housing taught me an important lesson: His backpack was the place for him to place important possessions that a boy who had a permanent home would have been able to place in his room.  Indeed, Michael’s backpack was like his room and it was full of the things that mattered to him.  He had bestowed upon me the highest honor possible—the fact that he deemed my book, Hope Somewhere in America, worthy enough to carry around in his backpack.

*Name has been changed for confidentiality

Sydelle Pearl is an enrichment provider for HCEF’s enrichment programming in housing agencies. She has been with HCEF for many years and has worked with our children and youth in shelters around Pittsburgh. She shares her experiences as a published author to inspire children to use reading and writing as a creative outlet.