Experiencing Homelessness as a Teen, Jason Flowers is Now Executive Director of a Local Nonprofit

Experiencing Homelessness as a Teen, Jason Flowers is Now Executive Director of a Local Nonprofit 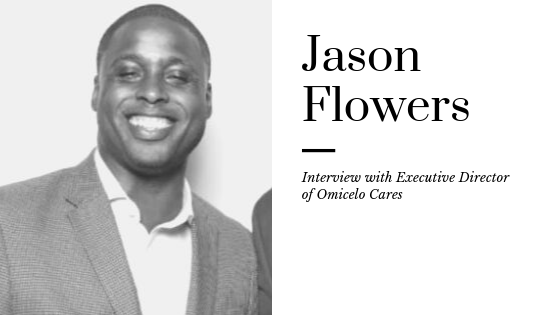 Jason Flowers is the executive director of nonprofit, Omicelo Cares, which creates economic change throughout communities without causing housing displacement. He’s worked within the nonprofit field for 16 years in development and fundraising, carving pathways to help others within lower-income communities. How did Jason get to where he is today? You may not know when you first meet him, but Jason experienced homelessness growing up, which shaped his drive to help others.

Jason grew up in a lower-income neighborhood in the South Bronx. He was in foster care twice, before he left his mom’s home in the 9th grade. Among other personal issues, his mother struggled with alcohol and narcotics addiction, so Jason’s aunt took him in after he could no longer tolerate the living conditions. He then spent his high school career sleeping on his aunt’s couch in the two-bedroom apartment she shared with her daughter and two sons. The move affected him in more ways than he can recall. He went from having his own home, to feeling like a guest. It also impacted his education and relationships with others.

“It kind of removed me from where I was in my community so I never really had true stable friendships outside of the ones I developed during and after high school,” said Flowers.

Despite his struggles, Jason kept attending school and studied hard. After high school, he attended college at SUNY Morrisville and then SUNY Plattsburgh, majoring in business administration. While Jason found a new home at college, there was still uncertainty of where to go over breaks. He tried to live with his mom after the summer of his sophomore year. This decision lead to him not being accepted in the home once again due to her struggles with addiction. He moved out within the first few weeks. Jason ended up staying with his friend’s family for the remainder of the summer. Thereafter he decided to stay in summer school the next year.

While Jason could have stayed with friends or at his aunt’s house over the following summers, he said, “I did not feel like I wanted to go back and be a burden because it wasn’t my home.”

So Jason spent some of his holidays and summers by himself on campus. Sometimes he would hang out with other students over break, one Thanksgiving carving a chicken together. He took out extra student loans to stay in the dorms over the summer.

After Jason graduated, he knew he wanted to use his degree to help others. And soon enough, he was approached by the Boy Scouts of America, who asked him in a job interview, “How would you like to help others and get paid for it?” After graduation, he worked with the Boy Scouts for over 14 years, serving low-income communities similar to the one he grew up in.

“That was my passion,” said Flowers. “I knew that when I graduated from college, whatever job I was going to have I was going to do some community work.”

After his time with the Boy Scouts, Jason worked at East End Cooperative Ministry, an organization that provides some of the same resources him and his family received growing up. Now, he supports lower-income communities through Omicelo Cares. The organization’s mission is to grow community members’ incomes in low-to-moderate income neighborhoods through specialized real estate education and deep supports for small businesses.

Throughout his nonprofit career, Jason has always carried his experience of homelessness with him. He does not want others to think homelessness is merely growing up on the street or in a shelter. Homelessness extends beyond that—it’s not having your own space. It’s living out of a bag or a small space in the closet. It’s not having the security knowing where you will lay your head at night. It’s constantly having to adjust to other people’s living habits and having no sense of privacy. He says his experience with homelessness is something that still affects him today, even though he has his own home with his wife and kids.

Jason’s story demonstrates the challenges of youth homelessness and how it affects young people well into adulthood. It also demonstrates the importance of having a stable home, receiving community support, getting a quality education, and pursuing your passion. Jason dedicates his success to individuals like his aunt and programs and organizations that assisted him during his struggles. He believes that programs like HCEF can be a catalyst to success for all of the youth we serve.